Create a backend in Javascript (part 6): How NodeJS work under the hood?

Here is a series of articles to help you create backend applications in Javascript.

Node.js is now a must, so it is essential for a developer to master it.

I will publish a new article every two days and little by little you will learn everything there is to know about Node.js

How NodeJS work under the hood?

In this section we will do a little theory and find out how NodejS executes its JavaScript code.

As you know, NodeJS allows to execute asynchronous code. This concept may seem simple but in the background it is a bit more complicated. What determines what code is executed? What determines the order of execution?

Understanding these concepts is essential for developing with NodeJS. No need to become an expert on the subject but at least understand the basics.

Note that some concepts have been simplified in order to better explain them.

The architecture of NodeJS 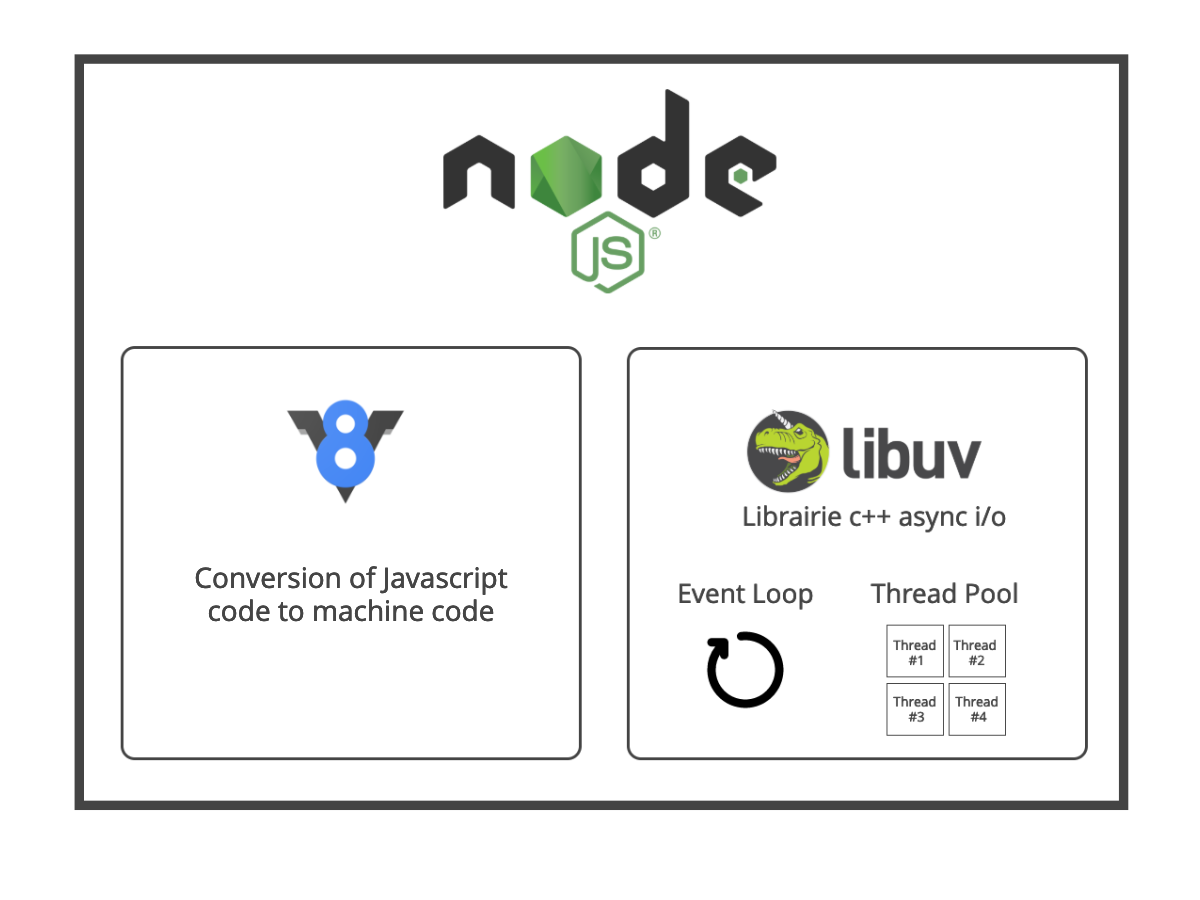 Is an open-source library, written in C ++ which specializes in asynchronous i/o execution (ex. File system, Networking and more)

An important point to understand is that NodeJS works in single thread mode.

That is, it can only perform one task at a time. If a task requires too much time/resource then it will block/prevent other tasks from running.

Imagine, for example, if there were 100,000 users on the site at the same time requesting access to the database, the response time would quickly become unacceptable. This is why NodeJS needs efficient management of asynchronous code execution .... That's the job of the Event Loop

The Event Loop is used to manage asynchronous code such as callbacks, network promises and requests which require little resource. And when a task takes too long to execute, so as not to block the thread, the Event Loop will delegate this work to the Thread Pool.

The Thread Pool can run tasks in parallel and therefore takes care of more cumbersome tasks such as access to the file system and very demanding processes such as for example video conversions or cryptography.

Execution order of a NodeJS application

When running a NodeJS application, the initialization code, 'requires' and top level code are executed immediately one after the other.

The callbacks encountered in our code are not executed immediately because potentially blocking, it would block the application to other tasks and other users. These callbacks are therefore registered with the Event Loop

Once the "top level" code has been executed, NodeJS will give control to the Event Loop so that it can execute the tasks it contains.

The Event Loop decides, according to pre-defined criteria, which execution order must be respected. The Event Loop can also decide to delegate a really long task to the Thread Pool. (eg access to the file system).

As long as there are tasks to be performed, the Event Loop will keep the application active.

Once all the tasks of the Event Loop are finished, control is given back to the main Thread of your application which will terminate the program.

NodeJS as an example

The theory is fine, but let's review it all this time with a concrete example

Based on the logic explained earlier, NodeJS will execute the code in the following order:

→ registering the readFile callback with the Event Loop

→ High level tasks completed, the hand is therefore passed to the Event Loop

→ End of the program

You would have thought that with a setTimeOut of 0 it would be executed immediately? But no, as seen previously, NodeJS sends the callbacks to the Event Loop and executes the top level code first.

Based on this logic, the NodeJS will execute the code in the following order:

→ Hand over to the Event Loop

→ End of the program

There are two lessons to be learned from this example. First, the NodeJS app is never going to stop. The Event Loop is endless since it waits for events from the server. The 'listen' function keeps the Event Loop active.

Finally, when a user visits the about page, Node will execute the 'do while' and since it is not asynchronous code access to the website will be temporarily blocked for all users until the do while end. This is a good example of how NodeJS is single threaded and you have to be careful how you code your application.

For example, in this case, it would be better to place the do while inside an async function so as not to block the thread.

That's all for today, follow me on twitter: twitter.com/EricTheCoder_ to be notified of the publication of the next article (within two days).

Did you find this article valuable?

Support Eric The Coder by becoming a sponsor. Any amount is appreciated!